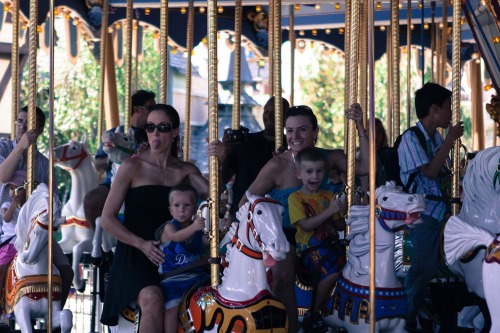 August 16th, 2012.  As I walked into CHOC (Children’s Hospital of Orange county) carrying Savanna, there was a calming familiarity.  Recognized by the admissions staff and 5th floor staff, it felt like a homecoming of sorts.  This was supposed to be a periodic monitoring with expectations of nothing new.  Once you mention she is probably having seizures of some kind the tone of the conversation changes quickly.  Most of the nurses and tech’s we knew didn’t realize we had made the move to Texas already, so conversation about the move helped lightened the tone.

Once the EEG equipment was in place, it was a waiting game.  With infrequent seizures, this time can really pass slowly as her aggravation with the head-wrap grows.  There is little I can do, and I have to stay sharp to catch her seizure when they occur.   My indication of abnormal activity helps queue the technicians monitoring her EEG output more closely during those episodes.   She had a couple of events throughout the afternoon, but then at 1:15 am Friday morning, she had a cluster episode.  Consultation with doctor later that day confirmed our fears.  The EEG indicated the seizure originated from the left posterior temporal lobe, which is where she has always had abnormal activity.  This was a new seizure type though, so the first step was to try to control the seizures with medications.  She needed to be stable before traveling back to Texas, and I was planning to drive back with her and the family in two days.  What came next was significant period of learning as a caregiver and parent.

Savanna was ‘loaded’ with Phenobarbital around 4pm Friday as a first attempt to arrest the seizures.  Not sure why they use the term ‘load’, as the loading dose is no different than the next dose which is called maintenance, even if on a titration schedule.  Anyway, she slept almost immediately with initial load via iv.  She slept for nearly 7 hours and then awoke completely altered.  Her hysteria and rage was something I had never seen before in person.  As a parent you see pain from emergency procedures (broken bones, sutchers, etc.), you see the ‘breakdowns’ of toddlers, colic of infants, but this was different.  The next four hours I had to manage a possessed child.  Finally, she gave up the fight and went to sleep.  I was exhausted and emotionally distraught.  I didn’t know what to think.  Was this the new normal?

After her first maintenance dose of phenobarbital, her anger subsided to extreme fussiness (yes, extreme fussiness was better than before), and then she just seemed to become absent to me.  I had a final discussion with the doctor about her disposition, and took away from the conversation that her extreme fussiness may or may not be the drugs.  The reality set in that this could be the progression of her disorder in her brain.  As she grows, the situation can change quickly with regard to her brain.  Her doctor felt she was safe to travel, so she was discharged just in time to attend Rebecca’s brothers wedding reception.

It was very refreshing being around family, but 50 hours straight in the epilepsy unit as a lone parent of a sick child requires some decompression before re-entering society.  Not having that, I felt somewhat out of touch with what was going on around me.  There can be a general lack of concern for rules.  Disciplining my kids for bad behavior is more difficult during these first few hours outside the hospital environment.   I felt detached from the situation and the one focus of my last 50 hours was now taken from me and being passed around.  I watched my daughter go from person to person, and I could see how far away she was her in disposition.  All I wanted do was hold her and I didn’t need anyone else to do it, but I didn’t want to take that time away from the other family that was there either  as they don’t get to see her often.  We were warned that her seizures could start again, which really put me on the edge.  As a parent, you try to be positive and behave maturely about the situation,  but when she was out of my sight for more than a few minutes that night, I found myself nervous.

We finished up that night early, and were able to get her settled back at the rented house in Long Beach.  We spent some time in the hot tub, and I remember familiar thoughts from months past.  I remember being almost comatose mentally after the time in the hospital and then being ‘on’ for the other kids for several hours.  It just takes time process the information after you leave the hospital.  I awoke the next morning to the first ‘daddy, can I have…’  Rebecca had already boarded a plane to get home early to prepare for work.  I packed the van and tried to get going quickly.  After a few hours, I had to laugh.  El Paso by nightfall was out of the question given our late start, so Phoenix was the new way point.

That evening in Phoenix,  Savanna seizures returned.  Still inexperienced at dealing with this, my heart just sinks and then a sense of urgency overcame me.  I didn’t know what to do.  It was like I got hit with a sucker punch.  I called Rebecca, and I could hear her concern as she felt a million miles away and helpless.  We were both calling the on-call neurologists in CA and TX trying to get someone to help us.  Finally, I worked though my options with the on-call neurologist with the new team in Texas.  We decided to increase the Phenobarbital, then monitor her condition.  Savanna was really cranky that night and neither of us slept well.  We got on the road the next morning to El Paso and the seizures started again.  More consultation that evening in with the neurologists left me in a real predicament.  The phenobarbital  dose was maximized, even for in-patient care.  Savanna was heavily sedated, but still having seizures.  With no diastat on-hand, it was risky making the trip from El Paso to Houston.  I decided to try to make to Houston as my options in El Paso were very limited with the family in tow.  I investigated pharmacies on the way that had diastat in stock and made note of their phone numbers and locations.  The next morning was nerve racking.  Quickly through a continental breakfast and on the road, right?  Right.  Has anyone tried to get a 2 or 4 year old to eat a good breakfast quickly?  After a big mess and multiple times to the bathroom to make ‘pooh-pooh in the potty’, I packed in the van and we finally started to haul a$$.  Through the city stretches were painstakingly slow, and we had to stop at least a few times totally almost 2 hours.  Once on the open road in Texas, it was a different story.  The manual for the Yakima roof box indicated not to exceed 70mph, but I can say with confidence, it is qualified for a much higher amount.  750 miles and less than 10 hours of driving later we met Rebecca near our house to transition Savanna and I to another car as we planned to continue straight downtown to Memorial Herman EC.

[Sidebar:  Yes, she was having seizures.  But, we had not yet seen out of control, dangerous seizures.  And, administering Diastat for the first time in the middle of the desert in Texas was not a good idea.  In the end, I am glad no one gave me the script.  I was not ready to use it, and if she had gone into respiratory distress in the middle of nowhere, I would never have forgiven myself.  Unfortunately, during the coming weeks Savanna would educate me about when Diastat is needed.]

Once at Memorial Herman EC at the Texas Medical Center, she had several seizures in the waiting room of the EC.  It was not until then did they feel this may be important.  I remember being furious, listening them talk about what they had for lunch while my child was having seizures.   I finally was able to get the attention of the staff.  I was very aggressive in my demeanor, and end up apologizing more than once for being  a bit too rude.  However, I have learned, no one will advocate for your child but you.  Few people know your child as well as you.  A neurologist on call was able to see Savanna and within 10 seconds of holding her she seized.  He agreed with my assessment that she was having seizures, big surprise, and should be treated.   She was admitted, she was ‘loaded’ with Keppra, right away to try to control the situation.  It was not the drug of choice, but without the results of the POLG 1 gene mutation test, it was one of our few safe choices.   She had rough night, but now seemed as though she was getting help.  We moved to the EMU (Epilepsy Monitoring Unit) at Memorial Herman in the early morning hours where she was hooked to an EEG monitoring unit.  After 24 hours, we were told that she was having seizures originating from the right and left side of her brain.  We were devastated.  Up until now, we had this hope that the right side of her brain was more healthy, and maybe she could still thrive if a hemispherectomy was the procedure of choice (this is where the entire left or right half of the brain is removed).  She is still so young that the plasticity of the brain would compensate and she could still develop with relative normalcy.

So she was released from the EMU, off the Phenobarbital and Keppra and her seizures were somewhat improved.  The day of the release, I spoke with the doctor, and there were statements like “You may need to accept that your child will have a normal pattern of seizures.”  We were absolutely crushed, as we could already see her milestones dissolving, again.  We honestly felt like the situation was hopeless.  I called our epileptologist just before she was to board a plane for France for 10 days, and had another short conversation that provided some relief about that subject. But still, I could hear the general concern in her voice about Savanna’s future.  It was a very helpless feeling, as Savanna’s new normal was now complex partial seizures.

musing about music and its Creator

The story of a little Bee, a little bug and their family.

Updates and information for our family and friends

Beyond the Ion Channel

Our Journey with Infantile Spasms

"Infantile spasms is one of the 'catastrophic childhood epilepsies'”

Views on Life with Autism from a Mommy-Therapist

Star In Her Eye

A Blog about Living a Whole Life With Epilepsy

Our family's journey with a special needs child

One in Twenty Six

Raising awareness and building hope, one story at a time